History of the Grounds

In 1900, three years after his marriage to Katharine Fearing Hubbard, Colonel Clarence S. Wadsworth began preparing plans for the site of their future country summer residence, “Long Hill” in the rolling hills of western Middletown. An authority on the emerging science of forestry and conservation, Colonel Wadsworth had a concern for the environment far ahead of his time. Working with the nationally renowned landscape architectural firm, the Olmsted Brothers, 500 acres of Long Hill were designed in the tradition of a working landscape. They created an estate that evolved from the formal and classical near the Mansion to varied, well-managed forests and pastures. The New York architecture firm of Hoppin and Koen designed a domain on par with the estates of Lenox, Massachusetts, and the “cottages” of Newport, Rhode Island. For over 30 years, Long Hill was the center of ceremonial life for the Wadsworth and Hubbard families. In 1934, a thousand guests, escorted by the Governor’s Foot Guard, celebrated the wedding of the Wadsworths’ son Julius and his wife Cleome at Long Hill.

After the Colonel’s death in 1941, a portion of the land was willed to the State of Connecticut for use as a public park, Wadsworth Falls State Park. The remainder of the estate was managed by the Rockfall Corporation, a charitable foundation created by Colonel Wadsworth, to further his interests in conservation and forestry.

In 1947 and for the following forty years, the Mansion was a retreat and welcoming presence in its secluded setting for those visiting its next owners, the Religious of our Lady of the Cenacle. The property became known simply as “The Cenacle,” and is well remembered by many citizens of Middletown. Shelter, meditation, and religious instruction were offered for the wider community. During this era, several parcels of land were sold off, and the size of the estate was reduced to the current 103.5 acres. The main building was enlarged by two sizable wings on the west and north elevations.

The Religious of our Lady of the Cenacle sold the property in 1986 to a developer, who then sold it to another developer. The Mansion was considered a negative asset, and the land also turned out to be unsuitable for small-lot development. Eventually, both land and buildings fell to decay, vandalism, and extreme overgrowth as the fortunes of the developers waned, and banks took ownership. The plight of the Estate was taken up by preservationists and conservationists, who urged the city to look for a way to salvage whatever could be saved for future public uses. 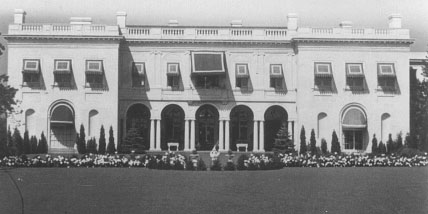 Middletown agreed to try to purchase the property even if open space were to be its only asset, and successfully applied to the State Legislature for a grant for this purpose. Using this grant and its own Open Space Funds for a basis, it went on to explore future uses for the Estate. In 1993 the city commissioned an architectural and structural facility study to ascertain whether or not the mansion could be saved from its state of extreme distress and destruction by fire and vandalism. When the report came back with a positive outcome, the city appointed a broad-based committee to study the feasibility of future adaptive reuses of the building and park, should an historic rehabilitation be attempted. Finally, on June 30, 1994, the Long Hill Estate became the property of the city of Middletown.

Funded by $5.8 million dollars in City bonds that were authorized by a vote of the citizens of Middletown, the Wadsworth Mansion and immediate grounds have undergone a complete historic rehabilitation. The project started with the demolition of the fire-damaged wings and partition walls added after the Wadsworth era. Although all modern code and ADA requirements have been met, the building has been returned, for the most part, to the configuration of the original Wadsworth design. Restoration took two years and was completed in December of 1999. Once again, the Wadsworth Mansion is a center for ceremonial and cultural activity